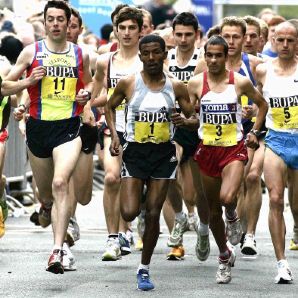 I did my first marathon last year along the great Ocean Road in Victoria. This stretch of road is the sort of thing and features in auto magazines as one of the “worlds best coastal drives”, that sort of thing. It’s also very hilly.

My program consisted basically of 2-3 early morning runs on my own, with a “long-run” on the weekend. Long runs were supposed to get out to about 30 km by the time training was done.

I really struggled. The early mornings, running on my home, showering and changing MSAC in South Melbourne, it all became a drag. It was lonely, and I got injured, so I was running in the pool by the end. M my really long runs never happened.

Nonetheless I was happy to run a tick over 4 hours, and hobble my way into Apollo Bay, proud of my achievement.

Since then though, I’ve joined a local running group, Sporting Spirit. I never knew anything like this existed to be honest. It’s like a gym membership, but just for running. There are sessions almost every day that I can attend if I wish, at the Tan, or Princes Park, places like that.

I’m on the Tan two mornings a week. Our coach, Kate devises the sessions and has about 10 of us improving our technique and fitness. It’s made a massive difference. I really look forward to the sessions and the ones I do on my own to.

There’s a few of these groups around (I’ve since discovered), and I’m sure that there are similar things for swimming, or cycling or whatever. Having a few people around you that understand what it is you like about that activity, and why you slog it out on the footpath, kilometre after kilometer, every week (because it doesn’t SOUND like fun) is a great motivator.