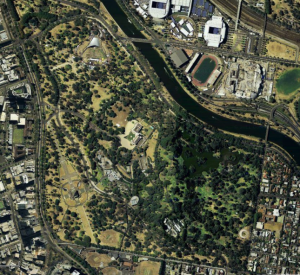 The Tan is an iconic Melbourne running haunt, that circles the Royal Botanic Gardens, just south-east of the CBD.

The Botanic Gardens are to Melbourne, what New York’s Central Park is to that city, and on a relative scale! The massive expanse of Central Park suits the NY attitude perfectly, whilst the understated seclusion and size of Melbourne’s version pretty much sums us up too.

The circumference of the garden is notable for its sandy but solid running track, affectionately known to Melbourne runners as “The Tan”.

The Tan can get very busy, packed with runners, squads (try Runshaker guys!) and those tire carrying cross training types, especially in the warmer months during daylight savings. Every Melbourne runner has a “Tan time”, and visiting international runners are immediately taken there by their hosts, to enjoy the atmosphere and perhaps have a crack at the record.

At the time of writing, I understand the men’s record to be held by Craig Mottram at 10:12, and why not, he’s got every other Australian mid-distance record! The female honour goes to Kate Richardson (Anderson) with 11:55. This is not an Olympic event. There is no official body monitoring and recording Tan records. There are some structured events over the distance (like Go The Tan), but your Tan time is your Tan time, and deep down you know what your PB is. Mine is 14:49.

Of course you can start and finish anywhere at all, running as many laps as you feel like, but for that one flying lap, most people start at the “horse trough”, near the Swan Street river crossing.

Here, in the shadow of Rod Laver arena and the old Olympic swimming pool building, your push begins.

Running clockwise, there’s about 800 m of flat track, then a slight rise before the Anderson street corner. Turn right. Up, up, up. The famous Anderson Street Hill feels like it will never end. You are starting to blow now, and just near the top, the Gardens staff have thoughtfully placed some pungent smelling native plants, the last thing you feel like you need.

It’s another right-hand turn at the top of Anderson Street, you’re about 1500 m in now, tracking down hill along the recently redeveloped section. Depending on the time of day, you’ll see people drinking at the Botanical Hotel or lounging on the grass between. Both seemingly better options than what you’re up to.

Slightly uphill to the 2 km mark, and then round the old observatory, on your left is the Shrine of remembrance. I’m always struggling by now, and I try to think of the Anzacs, and the insignificance of what I’m feeling compared to them. It normally doesn’t help.

You’re on the back nine now, the antagonist of the Anderson Street Hill. It’s not as steep going down, but the section is longer so you’re off to the races. If you’re lucky, you’ll get a second wind about now. You’ll probably look at your watch as you cross government house drive, the only road crossing on the course. Mind you, I don’t think I’ve ever come across a car.

Try to pick up pace on the final downhill section that hugs the perimeter of the music bowl. By the time you see the river again, there’s about 600m to go. The make or break section for your PB. If you’re finishing strongly, this portion of the course feels fantastic. Flat, with the finishing line clearly in sight you can reel in your dreams. When it didn’t go so well, it’s a nightmare here. Where did it go wrong? Did I get out hard enough? Maybe you should have rested yesterday!

Back past the horse trough, stop the watch and grab the front of your shorts. You’ll be bent over gasping for a few minutes yet, hopefully satisfied with your current fitness level. The Tan doesn’t lie.

I’m on the Tan most mornings these days. I recognise all the regulars, and the atmosphere and energy really get me going.

I was lucky enough to have some advice from that women’s record holder, Kate Richardson, who told me the secret to running a fast Tan time.

“Go out hard at the start, make sure you finish fast, and don’t forget to run flat out in the middle”.

I only ever seem to manage the first part. Still, I love the place and it has become part of me. Regardless of what I do or where I go, I think the Tan will always be a place I’ll come back to for a run and think. Everybody needs a place like that.