My experiment with Pose running has, as expected, led me down many more rabbit holes, as I look for more and better information. I’m delighted to say that I have found a terrific book on running technique, by a local Melbourne runner named Brian Martin.

Brian’s story is one that’s incredibly familiar to me. An enthusiastic but non-elite runner, Brian constantly battled with injury and set about seeking ways to minimise his forced lay offs. He did this by changing the way he ran. The great part is, he’s done all my research for me (and he’s done a lot), and he’s written it down in an easily read eBook. 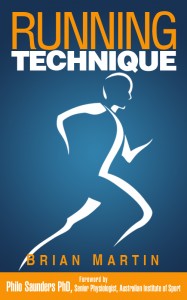 Brian doesn’t talk directly about Pose running, but his suggestions and findings support an action that is very similar.

I am now employing Brian’s advice, tinkering with the Pose action. It’s more awkward still, but I have to say it feels really good when I THINK I’m getting it right.