I’ve also learned a bit of editing wizardry, to put the before and after, side by side.

So what about the analysis? Well, overall I’m pretty happy. I am looking at 5 main things. 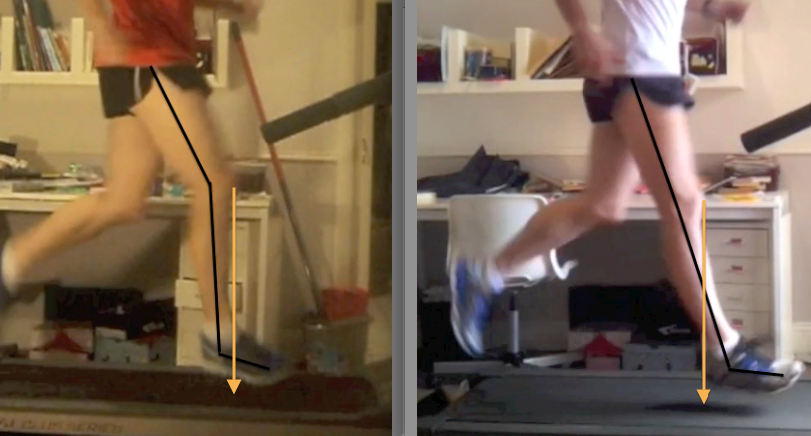 In preparing to land, I am trying to keep from extending my leg too far, I don’t want to be using my quads to throw my leg out in front. These stills are taken when the leg is as far forward as it gets, and I am really happy. You can see the vertical line I have drawn downward from the front of the knee. My foot is only slightly ahead now (left). The motion is different here too. In the before shot (right), I’ve stabbed my foot out in front, and it’s pretty much just hanging out there, waiting to crash land. You can’t tell in the stills, but in the after shot, the foot is already moving downward and backward, into the next stride. This brings me to . . . .

There are two things in this photo to look at. It’s taken at the moment the foot makes contact with the ground. Firstly, see the angle of the foot in relation to the ground. I am landing more fore-footed now. In addition, I’ve been trying to get the landing back under my hip, using my hamstrings to initiate a backswing during landing prep. That looks like it’s working too. The vertical arrow from the hip actually connects with the heel in the after shot. 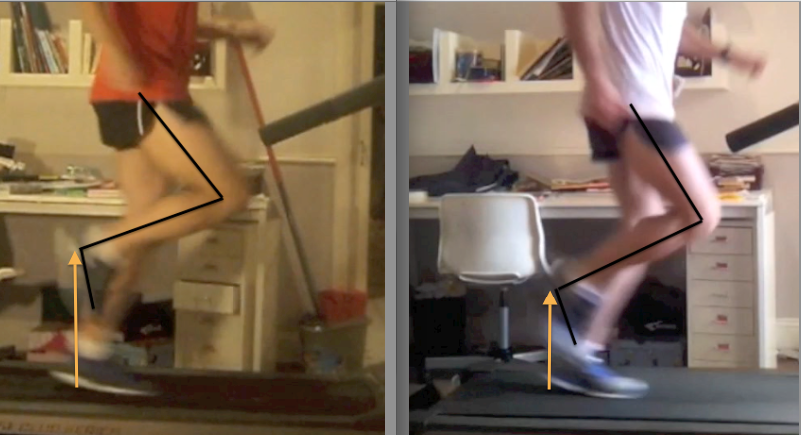 A little more subtle here, but I’ve been concentrating on trying to get my knee much higher. It feels much higher, but doesn’t look it here. What I do like is the height of the ankle as it comes through. Much closer to my bum. The hammys are working here too!

From this angle, I am hoping to see my feet landing underneath each hip, instead of centrally, under the pelvis, as they dud before. This is better, but what I am really happy with here is that I look more comfortable. In the previous view of this I looked really clumsy and forced.

Jack Daniels reckons 180 steps per minute is about right for elite runners. Well, I am far from elite, but I’ve raised the rate from 160 to 175! (per minute). That’s really obvious in the side by side video.

All in all I think I have mad progress. The injury rate is down so far, but I still have a few niggles. The action was costing me speed too, and that’s coming back (thank God). The project is far from over, but it’s been very interesting and fun so far.  I’ll prepare another video in another month or so and compare again.