I wrote last year about one of my favourite places in the world, the Tan track. I’m delighted to say that since that post, the City Council has continued improvements and maintenance, and the place looks as good as it ever has.

Last week, a new feature was unveiled at the “horse trough”. This spot is the accepted “start line” for those that wish to time themselves around the circuit. It is now adorned with (about) a 4 metre tall tower, that pays homage to the history of the Tan as both a Melbourne landmark, and a home for Melbourne runners.

Gracing the tower is a clock, displaying current time digitally. Below that is inscribed some historical information. The Tan not initially encircle the Gardens, but stretched from Anderson Street to the city along the Yarra. It was part of what then was a novel public facility, a recreational thoroughfare, consisting of four “lanes”. One for pedestrians, one for cyclists, one for carriages, and one for horses. I think the remnants of these can still be seen today.

There is a track along the water’s edge (for walkers), another further up the embankment (for bikes), the Alexandra Avenue bitumen (Cars/Carriages), and the part we run on today. This section was originally the horse track and was dubbed the Tan for the tan bark surface it originally had.

The great part about the new tower though is that it now displays publicly, what had been “unofficial” records.

My last post spoke of Craig Mottram and Kate Richardson as being the titleholders. As it turns out, Sarah Jamieson is recognized as the fastest woman ever around the Tan (although I understand that Kate may have reasonable grounds for protest!)

Here’s some photos of the clocks and the records. I can’t imagine going as fast as any of these people, but I can dream . . . 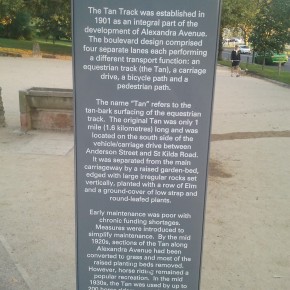 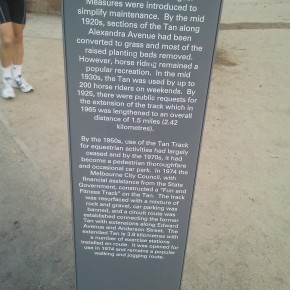 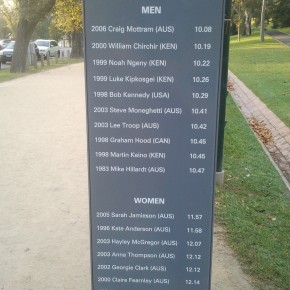 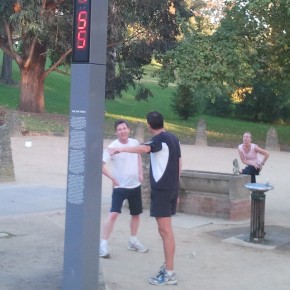