Until quite recently, only twenty odd years ago, poker machines were not legal in Victoria. The Leagues Clubs and RSLs of New South Wales were a senior’s club bus trip away and a novelty to us. Private licencing of pokies was out, even north of the Murray, so the revenues generated by the old NSW “one-armed bandits”, were appropriated for the improvement of community facilities and subsidising other entertainment (or so the story went).

Melbourne was a town full of pubs whose main trade was at the bar. The rivers of gold that flowed from gambling machines were the bastion of the unimaginative Sydney proprietor. In order to get those Port Phillip Bay tills ringing, a publican needed something to offer, a point of difference that would attract the thirsty and discerning pub-goer.

There were comedy venues, trivia nights, discos and sportsman’s nights. Some tried topless barmaids or hen’s nights, while others were renowned amongst pool players, with maybe half a dozen tables and a paid cue jockey.

But nothing, ever, under the stars that float above this fair city, has moved its inhabitants like live pub music.

In its heyday, the Melbourne pub music scene could regularly see four or five full pages of venue listings in The Sun, The Herald or The Age. From Footscray to Springvale, Box Hill and of course the CBD, places like the Thumping Tum, The Village Green, The Punters Club and The Tote would overflow with music lovers from Thursday to Sunday, every single week.

Sadly, over the last two decades, those damn pokies have spread like a disease throughout the state and the city. The temptation of easy profits drawn from addicted gamblers has proved too great, and many of the old band rooms are now filled with the tumbling carnival music of the digital fruit wheels. The joint ain’t what it used to be . . . . but some of us remember.

I still love living in Melbourne.

The tech scene here is one of the most welcoming anywhere and it’s great to be a part of it. The local meet up calendar is telling. People from tech organisations all over town meet every week, just because they love what they do and enjoy the company of others that “get it”. Of course there’s nothing unique about that, but each year in this home town of ours, a pretty special thing happens. 300 people involved in building and maintaining some of Australia’s most successful websites all go to the pub.

It’s the Battle of Melbourne’s Agile Bands, and this year, bands representing REA Group, 99 Designs, Envato and Thoughtworks all took the stage in and old school pub music brawl. The bands compete for the approval of the crowd and the votes of the bar staff, each playing their best 30 minute set. It’s fantastic to see old friends and make new ones from around the traps. All the bands are well supported and the placed is packed. 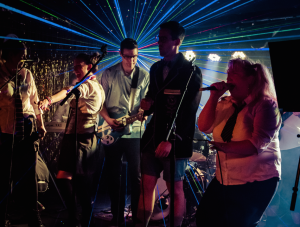 Living out your rock ’n roll fantasy (I’m a member of “The Envatones”) is one thing, but I think the night say a lot about the reasons so many of us love being in the software game. The people this job attracts are the type that have a go. People that take a risk to be part of something larger, something important, if only because we agree to value it. Individuals and interactions. We agree to value one another.

It’s organised pretty easily (with the aid of some hard work from certain individuals) and it’s a credit to the scene. The music, the colour, the energy, the life. It represents (for me) what makes us all so lucky to be in this town, in this game.

You can see a bunch of great photos from this year’s battle here. Maybe I’ll see you there if we go round again in 2016!